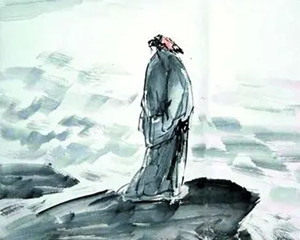 Written on the Wall of the Assistant Magistrate's

The assistant magistrate's task is to help the magistrate and look into everything that goes on in his county. Under him are secretaries with various functions. But though his status is high, he is too cribbed and encumbered to take any action. When a document has to be issued, the clerk brings it to him—made out. Holding the forepart of the scroll tightly rolled in his left hand, he pulls out its end with his right, swoops down on the assistant magistrate and looks at his askance. "Your signature, please!" he says. The assistant magistrate picks up his brush and signs with care in the allotted place, glancing at the clerk for reassurance. "All in order," says the clerk, and withdraws. The assistant magistrate dares not look into the matter and has no idea what is at issue. Though his position is high, he has less authority than the secretaries. But he is usually the first to be criticized, and is sometimes roundly abused for negligence. Is this why they created such a post?

Tsui Szu-li of Poling cultivated the arts and stored his mind with learning, broadening and deepening his knowledge from day to day. At the beginning of the Chen Yuan era, when he went to prove his worth at a test in the capital, he came first in two examinations. At the beginning of the Yuan Ho era, for a word out of season he was dismissed from the Supreme Court where he was a judge, and transferred to be assistant magistrate of this county. Upon his arrival he sighed and said: "This post is not too low, but I may not prove up to it." When he found his hands tied he sighed again and said: "What an appointment! I am not thankless, but this is a thankless task." Then he took pains not to be sharp or cutting, trod in his forerunners' steps, and stood on no ceremony.

An old wall inscribed with names in the magistrate's office was so dilapidated, cracked and soiled that the writing on it was illegible. Tsui replaced the beams and tiles, repaired and plastered the wall, and recorded all his predecessors' names. In the courtyard were four rows of old ash trees, and a thousand fine bamboos ranged solemnly by the south wall as if in attendance, while water gurgled past the steps. Tsui cleaned the place thoroughly and planted two pines in front of his office, where he chanted poetry every day. When asked any question he made haste to answer: "I am busy with affairs of state. Please go away!"